Though these symptoms are uncomfortable and undesirable, there are additional health issues that are also associated with low testosterone.

As testosterone decreases, the sex drive in a man lessens. Some of this lowered libido can be attributed to age. In the case of testosterone deficiency, it’s likely there will be a much more drastic dive in desire. Additionally, there is a decrease in the amount of semen that is produced.

Testosterone plays a large role in the development and conditioning of bone and muscle. Those with TD will often notice a decrease in muscle mass, and overall strength. Even if there is an attempt to restore muscle mass through weight lifting, it’s likely there will still be a resistance from the body in developing the muscle mass. Often, there is also a decrease in bone mass, known as osteoporosis, and can result in a higher chance of fracturing a bone.

In conjunction with a lowered libido, TD can also cause men difficulty in achieving an erection. Testosterone in and of itself is not the cause of an erection, but the hormone will stimulate receptors in the brain which in turn will produce a molecule called nitric oxide. Nitric oxide is the molecule responsible for igniting an erection. TD is a very common cause for this issue, but is not the only one, and medical confirmation should be sought out in the case that other health issues may be present.

Commonly affiliated with TD is an overall fatigue and lack of energy, regardless of the amount of sleep you get. Similarly, if you have  a lack of energy or difficulty getting motivated to be active, these are also common symptoms associated with TD. 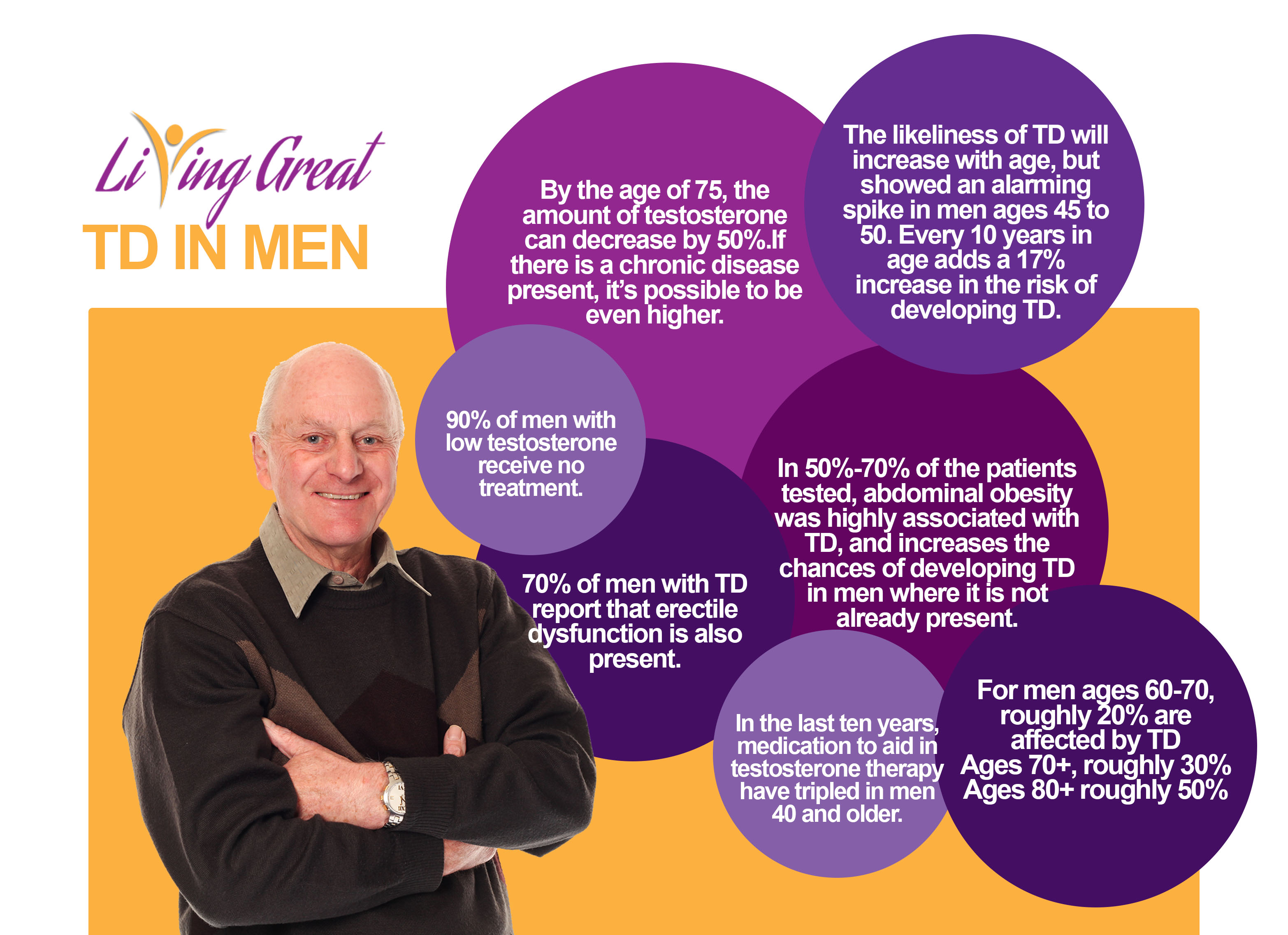 While all of these symptoms are helpful to identify what may be affecting you, it can be confusing to know why TD happened in the first place. Once you hit age 30, testosterone will start to decrease. But there are multiple other factors that can play a part. Here a few reasons you may be developing, or have developed, testosterone deficiency.

Each of these can cause a lower development of testosterone in the body, igniting the symptoms listed above. As previously stated, a blood test is the only way to determine if you do, in fact, have TD. If you are experiencing any of the symptoms above, have your doctor take a blood test. In the case that the testosterone deficiency test is positive, before you jump to medications, you have other options!
Living Great has been working with individuals suffering from testosterone deficiency for many years, and we’ve seen great success. Using bio identical hormone replacement therapy, men and women are able to regain the healthy, balanced levels of hormones necessary for their body to function properly. Through treatments there have been a decrease, and even an overall elimination of symptoms associated with testosterone deficiency, as well as menopause and erectile dysfunction. To learn more about bio identical hormone replacement therapy and the overall success it has given to individuals, visit our testimonial page. To schedule an appointment with us, contact us through our website.